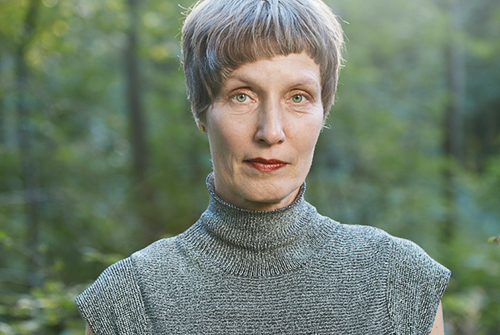 Ute Wassermann is known as a vocal soloist and composer/performer for her extraordinary, many-voiced and extreme vocal sound-language, which she has brought into experimental/contemporary music in diverse ways. She has developed techniques to “mask” the voice using birdcall-whistles, palate whistles or resonant objects, and designs sound-installations. A particular interest is the development of compositions for spaces with unusual acoustic qualities.

She studied visual arts (sound installation and performance art) at the Hochschule für Bildende Künste in Hamburg with Henning Christiansen and Allan Kaprow among others, and subsequently visual art, music and singing at the University of California, San Diego (with a DAAD grant). As a vocal soloist in contemporary and experimental music Ute Wassermann has performed in festivals, galleries and clubs throught Europe and also in Australia and Asia. As an improvising musician she performs regularly with musicians of the London scene (for example in John Russell’s Mopomoso and Fête Quaqua events) and in duos with Richard Barrett, Aleks Kolkowski and Birgit Ulher, in the quartet “speak easy” (with Phil Minton, Thomas Lehn and Martin Blume) as well as in larger formations such as the octet fORCH
. As an interpreter of contemporary music she has given premieres of numerous works composed specially for her voice, for example by Richard Barrett, Chaya Czernowin, Henning Christiansen, Hans-Joachim Hespos, Michael Maierhof, Michael Finnissy and Ana Maria Rodriguez, with the ASKO Ensemble, Elision, Munich Chamber Orchestra, KNM Berlin and others. She has taken part in music theatre productions by Matthias Kaul (Ensemble L’art pour l’art), Salvatore Sciarrino, Gerhard Stäbler and others, and performances with dancers, circus artists and visual artists; pedagogical projects and workshops with her choral composition “mimic” for festivals and cultural institutions.